“All rise for The Honourable Judge Stuart Matheson. Case 111624: Randy Balma vs. the Municipality.”
“Please be seated. Let’s begin.”
“Mr. Balma, what do you have to say for yourself?”

Hey, you ever hear of a guy named Randy Balma? He’s sorta famous around these parts — the talk of the town. A trial is taking place right now concerning Mr. Balma. Personally, I’m not interested in what the legal process sees in a man. I’m more curious to know who this guy really is, and what I think of him.

Searching for clues on the internet, I found a videogame developer by the monicker Messhof, real name Mark Essen, creator of Nidhogg, Flywrench, Punishment, and one titled Randy Balma: Municipal Abortionist. I figured that Messhof, at some point in time, had ties to Mr. Balma. At least, he knew the guy well enough to include him in the title of a videogame.

I hoped that Messhof could provide me with genuine information on the man of the hour. I emailed Mr. Essen asking for an interview, but he never replied. I felt as though he purposely withheld information, as though there was something that needed to be kept secret.

Questions about Mr. Balma still burned in my head. To learn whatever else I could about Randy, I decided to explore Messhof’s game for myself.

Randy Balma: Municipal Abortionist conveys its meaning through abstract imagery. I include extensive screenshots with the following descriptions, but these accounts pale to the game in motion. So please, download this game (it’s free) and play it. If you cannot, then take in the following as though you were investigating the mystery of Randy Balma for yourself. 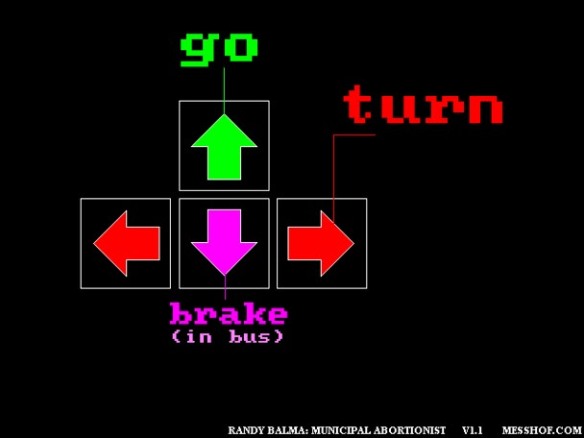 Booting the game shows a loading icon of white text and a baby’s hand followed by the title screen/tutorial page prominently indicating the deceptively simple controls. Overall, the title screen presents a bleak and foreboding entry point to the game, like the unlabelled VHS tape to some unknown horror film.

The opening cutscene pictures a disgruntled man with yellow skin, red lips, and burning eyes locked in an empty stare. The words “i feel like i been awake before but i can’t be sure and i’m drugged up on drugs and i think they are affecting me” scroll across the screen in red letters. A pulsing gray circle opens up between the man’s eyes, expanding to fill the entire screen. The enveloping grayness transitions to the first playable section.

Stage 1 is most easily described as the “bus on freeway” scene. The user controls a yellow vehicle reminiscent of a children’s school bus. The user must drive the bus down a lengthy road while navigating an obstacle course of red cars.

Hitting a guardrail or an errant car triggers a cymbal or drum sound, which adds comicality to the dangerous driving. Rimshots play out after the implied joke of bumping into things. Pileups perform cacophonous percussion arrangements.

Despite the constant threat of car crash, safety isn’t a primary concern while barrelling down this freeway. The frantic cars cannot damage the bus, but they will likely knock it off course. Impact with a car shoves the bus around in wild swings.

To make matters worse, the controls switch direction at random intervals. Pressing the left arrow key may turn the bus right and vice versa. This faultiness in steering contributes to the destruction ultimately caused by the user. It’s difficult to finish the level without moments of pure carnage.

Oddly, huge wrecks look appealing instead of gruesome. Explosions billow rainbows of colourful smoke, which morph into pixelated smudges that obscure the freeway and lead to more crashes. Stage 1 successfully combines vehicular mayhem with comedic sound effects and delightful colours to produce an uncomfortable mood that is tough to ignore.

The bus eventually reaches its final destination: a stopped gas tanker intersecting the entire road. Ramming into the tanker cues another crash of sound. Rainbow smoke spews from the collision and covers the entire screen. The game then loads an introduction to the second level.

This cutscene shows open sky with clumps of land in the distance. A shimmering beam of light shoots up, and a red projectile erupts from the multicoloured terrain. It climbs the screen and ascends into the atmosphere.

Stage 2 commences, providing a better look at the unidentified flying object. Up close and without the burning redness, the projectile is clearly a clock tower flying through the air. Archaic satellites litter the sky as the clock tower’s prey. Hitting a satellite breaks a piece off the flying tower and destroys the target, causing more raucous drums and colourful explosions.

The control in this level once again disadvantages the user. The clock-rocket accelerates quickly and turns with extreme sensitivity, making it easy to spin out instead of executing a gradual turn. In addition, the rocket expels a thick, smokey exhaust that challenges the user to make heads or tails of the situation.

Destroying all the satellites requires careful turning and a clear understanding of the gravity present. Without any more targets, the clock tower is free to soar up to the highest point in the level. Flying off-screen proceeds to the third stage. 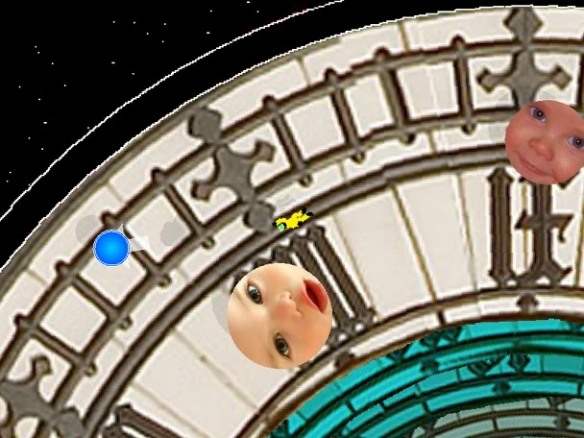 In Stage 3, the player is a small, yellow spacesuit who floats within a circular arena. The arena itself appears to be a complex, layered clock found in space. Various orbs inhabit the clock along with the yellow spacesuit. The larger orbs come in different sizes and depict baby faces, while the smaller, more elusive ones pulse bright colours. The coloured orbs are the targets of this level. Arrows point out their locations at all times.

The spacesuit looks quite helpless while propelling through space. The intrepid suit can swim around the emptiness, sometimes latching onto orbs that block its trajectory. Navigating the space-clock can be tricky because invisible currents pull the player towards the outer rim. When trapped in a current, the suit’s swimming stroke becomes ineffective at best.

Successfully landing and pushing off from a coloured orb pops it and cues an incessant beeping added to the level’s ambience. The sound intensifies by breaking a second orb, and it doesn’t stop until the player eliminates the third. When all three coloured orbs are popped, the whole space-clock collapses, sending the yellow suit, the remaining baby orbs, and huge multicoloured explosions drifting out to space. This solemn scene lingers for a while before cutting to the fourth stage. 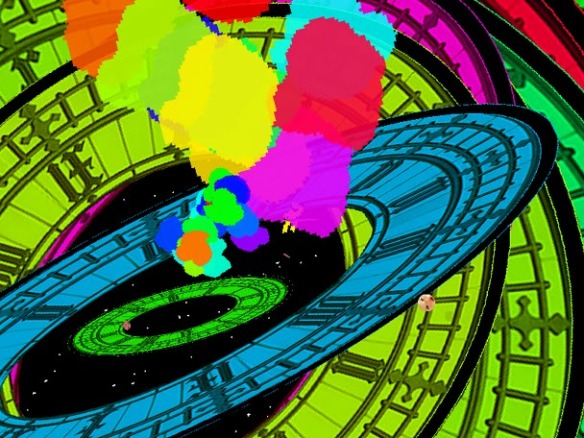 Stage 4…I had a difficult time deciding whether to include Stage 4 in my article. At first, I felt it had to be experienced on one’s own. I wanted to omit it entirely so that people would play the game to find out, but I knew of two groups who would never get to see this level first-hand.

The first group includes those with health problems. Stage 4 is the real reason an epilepsy warning sits atop this article. I think most of the game is safe to play for the photosensitive, though Stage 4 uses a constant strobe light effect and should not be attempted by those at risk.

The second group includes those who simply do not care to play. Randy Balma: Municipal Abortionist might be too shocking or weird for some to experience in person. I hope that is not the case.

Not wanting anyone to miss out on the fun, I will now divulge the contents of Stage 4. Here it is:

I like to call Stage 4 “The Creature”—a strange octopus composed of baby parts. Its main body is a large baby head. Dozens of mouths link together forming eight tentacles with hands at their tips. The Creature is the playable character of the level, situated in an environment that looks to be nothing more than rapidly flashing lights.

Stage 4 no longer implements the directional arrows that previously pointed out objectives. Instead, the user must look into the eyes of The Creature for guidance; its irises gaze in the direction of its nearest target. Amid the strobe lights, The Creature hunts down more baby orbs from Stage 3. 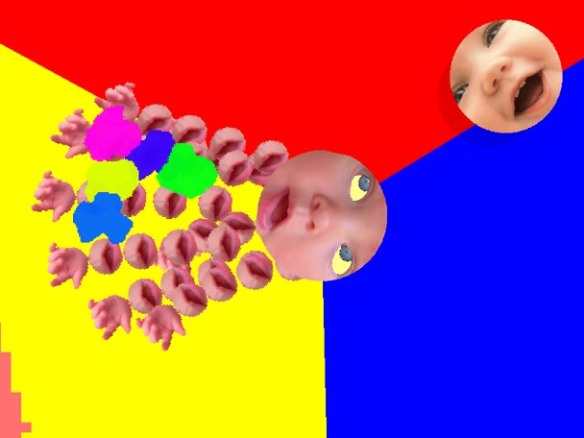 Annihilating all the remaining baby orbs causes The Creature to rest momentarily before bursting in the game’s final explosion. The title appears on screen, and fragmented black lines spurt from The Creature’s resting place. So ends a playthrough of Randy Balma: Municipal Abortionist.

Randy Balma: Municipal Abortionist incites emotion from any manner of appreciation. The title alone is provocative. Randy Balma is a unique and eye-catching name in itself, but the second half makes for a whole other beast. The term “Municipal Abortionist” is an interesting one. Abortion is a heated topic in society, so mentioning it is bound to rile some people. What takes the cake, though, is the word municipal before Mr. Balma’s trade. Adding the thought of a municipality, a very local area, makes the title far more personal than if it were “Randy Balma: Abortionist.” Randy is municipal. He’s in your area.

The game excels due to its narrative or lack thereof, depending on one’s point of view. Going from one playable stage to the next may give the user a sense of progression, but nothing directly indicates that the levels are connected as part of a complete story. The user is the one who must connect the dots, who must string together cutscenes and levels to perceive them as a single thing. The gameplay in each level is disparate from the next, and the cutscenes are nearly incomprehensible, yet together they feel cohesive as they develop the themes and atmosphere of the game as a whole.

Among its themes, Randy Balma: Municipal Abortionist toys with concepts of control. The first three stages have elements that hinder the user by obscuring the field of view or by supplying improper movement. Such methods of disorientation make the user feel less capable of controlling the player, and they depict a mix of confusion, inebriation, and powerlessness within the main character. Supposing this game does relate to Randy Balma, how can we criticize his actions if we are not fully in control either?

In truth, it’s difficult to ascertain whether this game really is about Randy Balma. Labelling the bus, the rocket, the spacesuit, or the Creature as Mr. Balma would be a stretch. All gameplay characters are reduced beyond a single human entity. So where is Randy?

Randy Balma: Municipal Abortionist assaults the senses. Presented so abstractly, its supreme bizarreness leaves the user questioning what they see. The game communicates through feelings and moods, not necessarily by the direct visual representations on screen. Its discordant elements unite to express not an idea but an elaborate, perhaps frightening, concept: the concept that is Randy Balma. And Randy isn’t out to prove a point; he means to make you feel a certain way.

The verdict? Randy Balma: Municipal Abortionist does good work. I respect its angle, you might say.

“The case is dismissed. All current charges are laid to rest.”
“You’re free to go, Mr. Balma.”